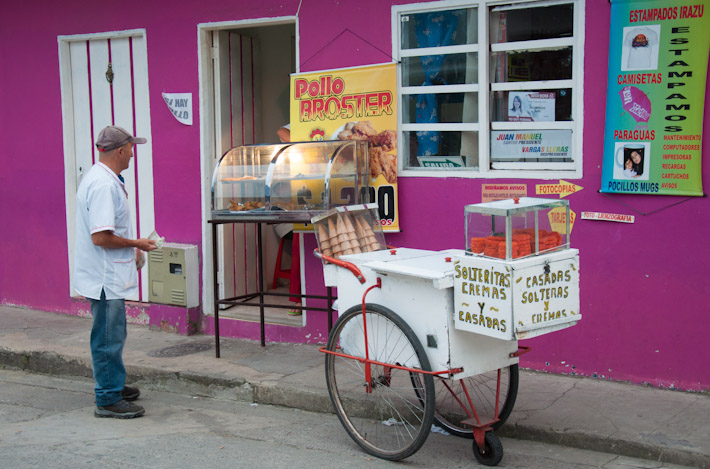 How to get fat in COLOMBIA

Colombian cuisine blends flavors and cooking traditions of Spanish, African, Middle Eastern and Asian origin. As you travel around the country, you’ll encounter different ingredients and dishes using corn, meat and fish as some of the main elements.

We were out one night in Cartagena de Indias, on the Caribbean coast, where we had made some local friends. One of them was eating grilled Colombian chorizo, while the conversation turned to vegetarianism. I was trying to explain to her what veganism was all about and she was shocked: “WhOOooOOOt?! You are saying that some people not only do not eat meat of fish, but they also don’t take milk, eggs or honey?” This lack of awareness for food options that exclude protein from animal origin was a very good intro to what I was about to eat during the next few weeks in Colombia…

These are some of the most representative foods

you may find while traveling in Colombia: These maize dough flat breads are as Colombian as food can get. The local answer to Mexican tortillas, arepas can be baked or fried. The dough doesn’t have much taste on its own, and that may be why even the simpler versions will include a very generous amount of melted butter (or margarine in the cheaper street vending options).

Eaten for breakfast or as a side with the main meals of the day, arepas taste better when stuffed, just like a sandwich. Common fillings include ground meat, cheese or even a full egg. The eggy option is very popular on the street food front: the arepa is stuffed with the egg and deep fried to an oily crispy goodness, enjoyed anywhere for cheap! Arepas aside, Colombians seem to love fried goodies. Most snacks you’ll come across on the street are deep fried, and this starts early during breakfast hours.

The fried range of nibbles you’ll come across is very representative of the ethnic and cultural diversity you’ll encounter across Colombia. Empanadas are common, just like all across Latin America. But in Colombia they are usually made with corn dough and are deep fried, with fillings of meat or cheese. Kibbe (pictured left in the image above), the Middle Eastern treat consisting of burghul dough stuffed with onions and minced meat, is very common as well. This serves as a tasty reminder of how Shakira herself, is a mix of Colombian and Lebanese. Buñuelos are simply deep fried dough, which can include a savory or sweet filling or no filling at all, and they have Spanish influence written all over them.

The snack pictured in the 2nd photo above is a Carimañola. This is a 100% Colombian treat, made with yuca (also known as cassava) dough and stuffed with strong coastal cheese, which is very rich and melts to a smelly yet intensely flavored consistency. Pescado al ajillo, that is, fish filet with garlic sauce. As always in the Colombian Caribbean, served with coconut rice and patacones, aka, fried plantains

Around the Northern Caribbean coast in Colombia, seafood is the staple food. The most quintessential Caribbean meal you can get around here, served at any regular joint, is fried mojarra fish with a side of coconut infused rice and patacones (fried plantains). For less than the equivalent of USD3 you can have an almuerzo (set lunch) including a small soup, a mojarra dish and agua de panela. This is the star drink of Caribbean Colombia, blending sugar cane, lemon juice, and icy water.

Apart from the much beloved mojarra fish, white fish fillets covered in creamy seafood sauce are also very frequent. Expect heavy preparations that will keep you satisfied for hours. Bandeja Paisa = a heart attack in a plate!

You cannot travel to Colombia and not eat a Bandeja Paisa. You just can’t… well, unless you are a vegetarian! Leaving the coast behind and going inland, this is the most typical dish you will come across. This platter that includes a little bit of everything (and more!) tastes like the Andean mountains, smells of the countryside, feels exotic and it certainly satisfies the greatest of hungers.

The Southern and interior regions of Colombia seem to be very fond of meat. Even dishes like “red bean stew” will (to my surprise) be served along with pork chops!

In Bogota, Ajiaco is one of the king dishes. Although it is known as a soup, I think that is a complete understatement for this stew type of preparation that involves chicken and three varieties of potatoes swimming in a rich herby broth. If you think this is not filling enough, keep in mind ajiaco is usually served with rice and a cut of velvety avocado: I don’t think I have encountered any dishes that could be classified as vegan in Colombia. The rare vegetarian treats one would come across (such as empanadas and other fritos) would normally include egg or cheese. Cayeye, for example, is another of those rare and much appreciated vegetarian preparations, consisting of mashed plantain topped with sweet corn and cheese: Cayeye: typical breakfast from the Caribbean coast of Colombia, consisting of mashed cooked plantains topped with sweet corn and cheese I am not a fan of booze. I don’t drink much other than the occasional glass of red wine, because I find other drinks heavy and overpowering. Yet, in Colombia, I discovered that cocktails can be natural, sweet and almost healthy! Here, cocktails are usually made with fresh juices and real fruit, blended to make refreshing drinks but with the kick that is expected from alcohol. And the best part? You don’t need to go to a bar or club to enjoy, as busy town squares (like Plaza Trinidad in Getsemaní, Cartagena) will sometimes have live cocktail stations.

Because you’ll need something to soak up the alcohol, street food vendors have come up with things such as “patacon con todo”. Take a base of patacones (flattened fried plantains), and top them with everything that is fatty (and tasty) that you have in hand: sliced sausages, ham, chorizo, BBQ chicken, beef strips, straw potato fries, tomatoes, lettuce and a runny amount of mayonnaise, spicy sauce and any other sauces you fancy! Chances are, this is the ultimate hangover food the rest of the world is missing out on!

This traditional coconut candy is common all over the country, but particularly beloved in the Caribbean region. Most commonly shaped as a ball, cocadas can include different flavors, but more often than not consist of shredded coconut, loads of sugar and not much else. I have tried cocadas with added dried fruits but this is one of those things that, to me, tastes better in its simpler form.

Last but not least… Colombian Coffee! How about a coffee? Anytime, anywhere in Colombia! Traveling to Colombia and not dedicating some time to sample different coffee brews would be a mistake for anyone into caffeine rushes – like us!

Colombian coffee is as good as marketing has led us to believe all these years across the rest of the world. They brew it to an intense goodness, serving it with or without milk, but usually with quite a lot of sugar.

Coffee vendors are ubiquitous in Colombia: they load shopping trolleys just like the ones you use at the supermarket, with flasks containing premixed drinks. You can have it black (or tinto, as they say in Colombia) or con leche (milky), served into tiny cups that invite you to repeat this ritual several times during the day. Bee is friends with Juan Valdez

Whenever in Colombia, indulge!

And if you feel like you’re getting fatter, do not stop eating.

Go shake off the calories with some salsa dancing instead!