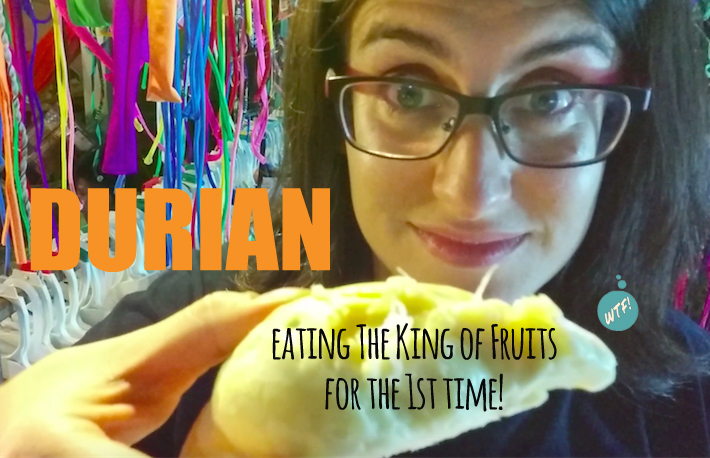 Eating DURIAN for the first time in THAILAND [YUCK!]

They call it “The King of Fruits”. Grown mostly in South East Asia and regarded as a delicacy in Thailand, durian is… well, how to say it… an acquired taste!

On the outside, it looks like a true warrior, grand and spiky, deserving of its royal designation. On the inside, though, durian is soft and custardy – yet, for my taste, not in a good way. It’s (in)famous for its truly pungent smell and a flavor that (supposedly) varies greatly according to level of ripeness. Durian farmers in the island of Koh Samui

When you visit a market in Thailand, you don’t need to look around too hard to find durian. Normally, the smell will come and greet you even before your eyes can place where the durian stand is. That odor is no joke! No wonder this smelly creature is banned inside hotels and public transportation. As seen inside a hotel in Thailand

Yet you’ll see that most local people love not only the fruit per se, but also use it in other desserts such as ice-cream, moon cakes or candy.

Like many other fruits in this country, it can be purchased already opened and cut, ready for consumption – just like we bought it in Bophut’s Night Market a few days ago.

This was the moment when we finally tried durian for the first time:

After filming this clip, we drank some coke in a silly attempt to extinguish the after-flavor in our mouths. Oh, what a dumb move! Not only the coke vendor made fun of us for being newbs “you eat durian? I don’t like!!” [insert a blend of hilarious/evil laugh here], the coke made us burp for hours… and we’re not talking about caramel-cola like burps here. Instead, it felt like we were farting through our mouths. We ended up eating some spicy crocodile skewers and, finally, the sweet yet strong chilly sauce of the meat marinade helped “cleaning up” the durian scents left in our palates.

Ashray came up with a theory that night: if food that smells good ends up smelling like poo the next day, chances are the stinky durian would smell like yummy food the next day. I am somehow happy to confirm that that was not the case!..

Have you tried durian before?
We’d love to hear your opinion!

And if you haven’t… would you have the guts for it?!