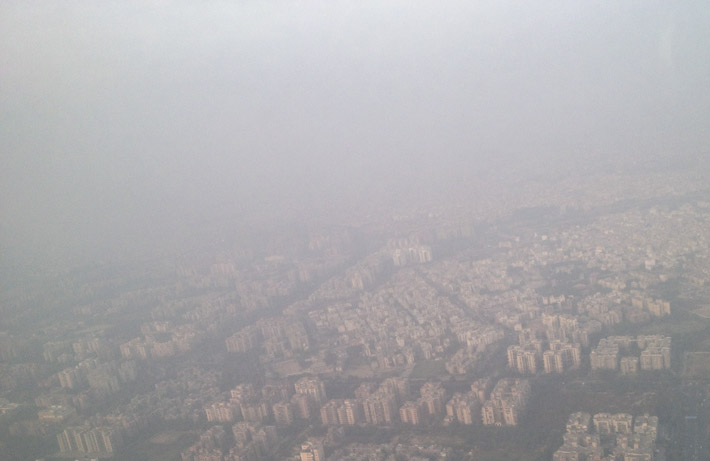 DELHI: Killing us softly with its smog…

DELHI. There are certain things in life that, no matter how well you know how they’re going to be, they always manage to surprise you. Every time we return to Delhi, specially during Winter, I’m always amazed at how polluted this city is.

While Beijing keeps on making the international headlines when it comes to air pollution, it’s like the world mostly forgets about Delhi. Sometimes, I wonder if it is because the rest of the world doesn’t care much about the fate of India. Other times, I think it’s because Indians themselves make less of a fuss about the toxic air they get to breathe in, as compared to the Chinese. At least in Beijing, you see people wearing protective masks all over the place. In Delhi, you’d be lucky to find a shop that sells them.

Delhi. The most polluted capital city on Earth!

Negativity aside, I’ve been observing progress in Delhi. Not regarding the pollution levels (those keep on getting worse and worse by the day), but in terms of mindset. The average person is now at least aware that a sky like the one in the photo above, taken yesterday, is NOT NORMAL. This is not a product of Winter or lower temperatures (after all, the temperatures during the day this December are ranging from 20 to 25C!). It’s most definitely something that us humans are responsible for.

Starting in January, private cars will only be allowed on the road on alternate days: even and odd, only both for public transportation and taxis. I am looking forward to see what happens, even though there are already political figures criticizing these measures. That’s right! Politics is bad even for the environment.

There are certainly other issues that India needs to deal with: poverty, waste management, women’s rights… you name it! But this is one that affects everyone, independently of sex, age or socioeconomic background. You need to be able to breathe in to do anything else in life. As such, this should be a top priority and politicians will only consider it as such when people start caring. Truly caring.

If you’re interested in this subject, read this article Ashray wrote about the air pollution in Delhi and let us know what you think!