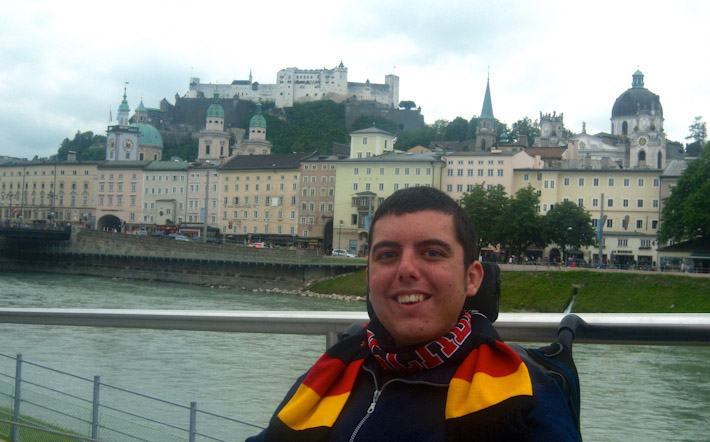 CURB FREE WITH CORY LEE: world travel in a wheelchair

As someone who runs a travel blog exchange, I come across new blogs everyday. But it is not everyday that I stop and read through them with such interest and find myself to be amazed.

This has happened recently when I stumbled upon Curb Free with Cory Lee. Cory is a 24 year old from the USA. He happens to be in a wheelchair but that hasn’t stopped him from traveling to different places all over the world. He also writes stories and practical info to inspire others in the same situation to go for it too!

Cory’s blog posts are about sharing tips for other wheelchair users, but also general travel tales that would appeal to anyone. As if that wasn’t good enough, his sense of humor is contagious. In his “About Me” page he mentions that he is “a travel addict who also happens to have wheels for legs (not literally)“. Not many people can laugh at themselves with such grace, and this is something to applaud! Without further ado, let’s meet Cory and see how he curbs free around the world!

How did your passion for travel start?

My passion for traveling started when I was very young, probably about 4 years old. My mom would take me to Disney World every Summer and it was always such a great trip. I would look forward to it all year. We’ve been to Disney World over 20 times now so we started mixing up our vacations when I was 15 years old. At 15 we started taking our travels internationally, going to places such as the Bahamas, Canada, Mexico, and Europe. Once we did this, it really opened my eyes to how big the world is and I wanted to see more and more. Now, I just can’t get enough. My passion to explore has never been greater than it is now and I hope that it never goes away.

We see on your blog that your Mom is present in most of your trips – she looks like such a fun travel companion! How do you normally agree on the places you’d like to travel to together?

Yes, my mom really is the best! She is usually game for anything, even though sometimes it may take a bit of persuading for me to talk her into it. She loves tropical places so anytime that I want to go to a beach she’s ready, but she isn’t too keen on older cities. And really, she is just worried about the accessibility so she is looking out for my best interest. When trying to choose a destination, we just talk through it and do lots of research. We both love traveling though so we’re easy to please. Cory and his Mom on vacation

What exactly makes your travel planning different from other travelers? What are the things you must take into consideration before going on a trip?

I have to start planning my trip way before most other travelers do. I usually start with Googling accessible transportation within the city before I even book a flight or anything. Without accessible taxis, trains, or ferries it is impossible to even get around. I want to know that there are plenty of transportation options before I decide on a destination. I also have to take into consideration the availability of accessible hotels, usually calling the hotel directly multiple times to verify. Requesting pictures of the room is always a good idea because their version of what is and what isn’t accessible may be totally different than yours. For example, I once called a hotel and asked if they had wheelchair accessible rooms and the receptionist responded by saying “Yes, we have an elevator”. She never understood that I needed a roll in shower and wider doorways. Since then, I always ask for pictures.

What would you say to other wheelchair users who would also like to travel around the world, but who might be letting fear get in the way?

I would tell them that sometimes I am fearful as well. I worry that the hotel room or transportation might not be accessible once I am there, but with proper planning you can organize almost everything before you even leave home. I have actually had quite a few mishaps in other countries, including one time when my wheelchair battery charger managed to blow up upon plugging it into the wall and the power went out throughout the entire hotel, but within a few minutes the power was back on and we found a repair shop where I could buy a new charger. I could have let this one incident ruin my experience, but instead I accepted it and found a solution. Any traveler, especially a wheelchair user, has to be willing to roll with the punches. Never let one bad circumstance define your life.

What is the most accessible place you’ve traveled to?

Aside from most places in America, the most accessible place that I’ve been to was Sydney, Australia. There are accessible taxis, but the ferries make it really easy to get around in a wheelchair. And it’s fairly cheap to ride the ferry, which is always great. Australia is also very modern so getting into buildings and attractions was never an issue. America could actually learn a thing or two from the Aussies. Surprisingly, London was extremely accessible as well. I wasn’t expecting it to be so accessible because it’s such an old city, but every black cab in London has a fold out ramp so that the wheelchair can roll right in. It was easy to get around the city.

When I traveled to the USA I noticed that cities where pretty well equipped for citizens on wheelchairs. At least compared to where I come from in Europe. What countries have you traveled to where life on a wheelchair would indeed be more difficult? Have you met any other wheelchair users in those countries?

The country that I had the most trouble in was France. I thought that Paris, being one of the most famous cities in the world, would be somewhat accessible. However, I was quickly proven wrong. There was only 1 wheelchair accessible taxi in the whole city that I could find and to rent it for the day it cost about $600. I tried to ride the train around the city, but it was not accessible. So unless I wanted to freeze (it was March and super windy) as I rolled around the city I had to pay for the taxi. I’m glad that I got to see Paris once, but I’ll probably never go back unless some major renovations are done.

The fact that you travel with a wheelchair probably makes the possibility of budget travel more difficult. How so?

It makes budget travel almost impossible. It’s really sad, but accessible taxis and tours always cost more than regular tours. Sometimes it can be four times as much. I recently inquired about an accessible one day tour of Puerto Rico and was told that it would be almost $800 for two people. A non-accessible tour in Puerto Rico averages about $50 per person. I want to explore the island as much as anybody else, but with prices like this it’s next to impossible. I really try to save every dollar that I can because I know that it will be expensive to travel, but it’s always worth it. Right now you are attending college. Once you are done with your degree do you plan on working and taking vacations in between or becoming a full-time traveler?

I actually just graduated college about a month ago (yay!!) and I’m currently trying to find a job. Ideally, I would love to find a job within the travel industry and keep traveling. I’ve applied to quite a few places already and am just waiting anxiously for the phone call. Regardless of whether I get a job in the travel industry or elsewhere, I will always be a traveler. Even if I only get two weeks off of work a year, I’ll make those two weeks the most epic two weeks ever. Haha!

What are some of the highlights on your travel life so far?

Australia is my favorite place that I’ve been so far. It was my number one dream destination for as long as I can remember and getting to go there this past February was truly one of the best experiences of my life. The Australian people are so nice and accommodating, and the cute little koalas aren’t so bad either. My first visit to Europe was right after my graduation from high school and it really opened my eyes to how big the world is as well. My mom and I went to Germany and drank beer in the Hofbräuhaus, met up with my best friend in Wiesbaden, and even ventured over to Salzburg, Austria. This was during the Summer before I moved off to college and it meant so much to me to have this time with my mom exploring a new country together.

We’ve read that you’ve even met Katy Perry on an all expenses paid trip to London. That sounds exciting – tell us all about it!

Well, it all started when I saw on Katy’s Facebook page that she was having a contest. The contest was in celebration of her then new single “Firework”, which happens to be one of my favorite and most inspiring songs ever. Basically, I made a 3 minute video about my mom, who is the firework in my life, and posted it to YouTube. Within the next couple weeks my video had garnered almost 100,000 views and soon thereafter Katy announced on the TV show Extra that I was the winner and she was going to fly four of us out to London to see her tour and meet her backstage. We were in London for a week, all expenses paid, and Katy was the sweetest person ever. She talked to us for about 30 minutes backstage. Her security was trying to rush us because she was running late for her show, but she pretty much told them to be quiet and she continued to chat with us all about London and I even learned that baked beans on toast are her favorite British food. It was such an amazing experience. On your bucket list you mention that visiting all 7 continents is your mission in life. What are the top places you’d like to travel to and why?

Hmm… That’s a tough question because there are so many amazing places that I’ve yet to visit. However, if I have to narrow it down then I’ll say Thailand, Iceland, and South Africa are probably my top 3. Hopefully I’ll visit them sooner rather than later. ;)