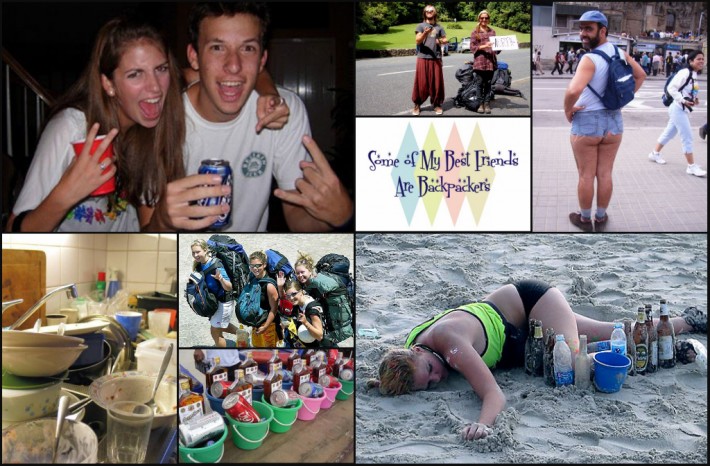 Maybe I should say WE are annoying, as I am also a backpacker. And I have a lot of backpacker friends too, of course. But going around the world and staying in multiple hostels, chatting with backpackers all over the place and observing travelers (specially in developing countries) has made me realize that some backpackers are undeserving of their freedom to travel and visit new places.

Here are 10 things to hate about backpackers!

1. They are pretentious little bastards OK girl… you are SO interesting!..

Asking you what countries you’ve been to, not so much because they’re really interested in knowing, but because that gives them the perfect opportunity to go on and on listing all the places they have visited. YAY, good for you!.. I hope you DO all the countries in the world and die happy.

Saying “I DID Thailand” or any other country (most typically around South-East Asia), instead of “I’ve visited” or “I’ve traveled to”. Apparently, when you land/arrive in a new country and spend a few days there downing beers, that counts as DOING a country.

3. They always talk about the same thing! That's right! My passport has more stamps than yours!

Book a bed in a dorm at a hostel and you’ll unavoidably be asked the same questions by your room mates: where are you from? where are you traveling to? how many countries have you DONE? I understand the ice needs to be broken and you have to start up a conversation somewhere. That would be fine if this annoying chit-chat wouldn’t end up in comparing travel plans more times than not. Backpackers feel glorious as they add new countries to their list. It doesn’t matter if you learnt anything from those places, those new cultures… you were there, you DID it, and of course, you’re an obnoxious self proclaimed adventure hero now!

4. They recommend stuff you couldn’t care less about… Just do what I tell you… I always know best!

Recommend things you MUST see and do, without even asking what kind of stuff you’re into. Backpackers LOVE talking about themselves… and talking about the things THEY like doing (as if they really meant them as tips for you). It’s just a variation of this self-adoring passion of theirs.

Tips such as telling you where you can find the cheapest beer in town (as if this was almost a question of survival) without even knowing if you drink or not, is high on the list. They just assume that, if you’re a backpacker, you HAVE to drink (A LOT).

5. They have a messed up sense of finances Beer vs Food in a typical backpacker's mind

Backpackers will easily complain about the price of food in a given place, even if this is a small fraction of what a similar dish would cost in their country of origin, and won’t end up eating a proper meal. But then, they can easily splurge on beer like it was tap water.

6. They bargain even with poor people If I don't manage to negotiate down the price of these fried insects, I'll go hunt my own!

Backpackers love to get the best bang for their buck – I get that as I do too. But what pisses me off is when I see those stingy privileged assholes bargaining down a few cents with someone who clearly has less luck than they do in life. It’s disrespectful for vendors who are trying to make a decent living (in their own country!) and who are charging fair prices to begin with. Some backpackers will take advantage of their desperation, amongst all the existing competition, and feel like kings when they manage to save $0.20 on something. Shame on you! 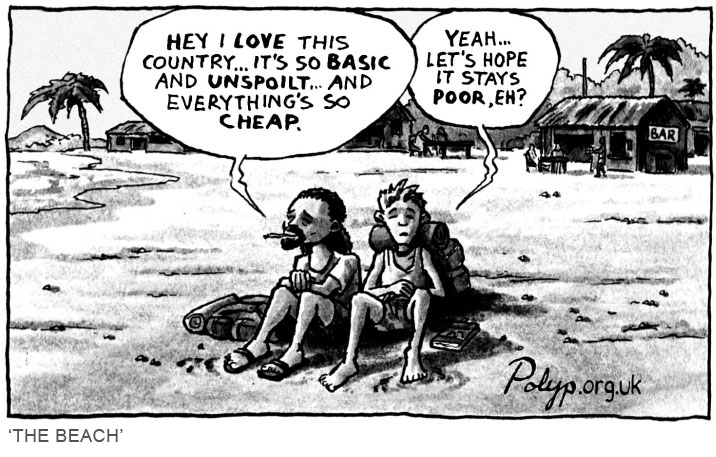 Specially when visiting developing countries and acting or think along the lines of “the white way is the right way”. This goes to comparing everything with “back home” (enter name of some western country) or loving that places are poor (because that means they can stay around for longer). The world is very diverse and there are many ways to do things – get over yourselves!

8. They go abroad and do things they would never do in their country What NOT to wear when you travel in India Many backpackers think they are very adventurous and cool. Back in their countries, a lot of them are just mommy’s little boys and girls. Otherwise, how can you explain that they cannot prepare a meal for themselves? Clean up after themselves? Don’t know how much detergent to use or how to press START on the washing machine? They have the most horrible sense of organization and they leave balls hair after using the common showers… they don’t know how to clean the pots and pans they use in the hostel kitchen and they certainly don’t know how to keep their side of the dorm room organized (and that involves keeping stinky shoes outside too). SO annoying! What’s worse than not being able to fall asleep? Having to listen to someone else having sex when you’re trying to get some rest. Also, you don’t want to even have a glimpse of those over tanned bodies with contrasting white unexposed bums… specially if they’re in the top bunk and make you shake as you try to fall asleep below.

I had once read a travel blog where the author was saying that he couldn’t sleep because the people on top of his bunk bed were having sex. Loud, shaky, out-there kind of sex – no inhibitions. Apparently, those backpackers were so drunk that once they were done with round #1, the girl came down and asked this guy: “so… you wanna dip too?“. Sharing is caring, my friends!..

What do you think?

What’s the most annoying thing about backpackers?