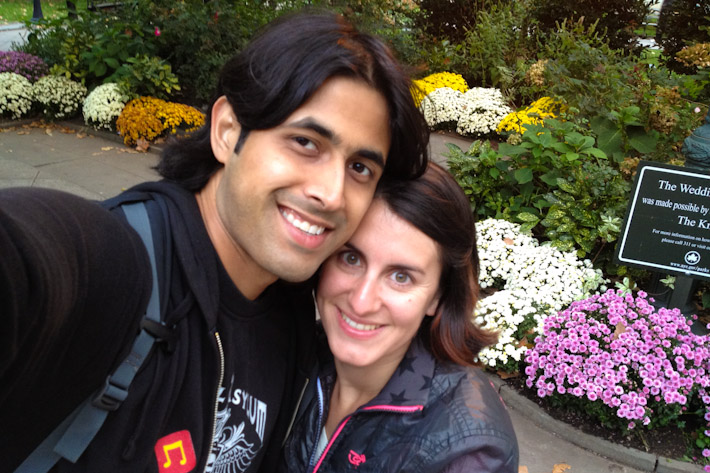 A&Z: what it’s like to travel in a multicultural couple

The differences between traveling solo and with friends (or as a couple) have been covered extensively in travel publications. Solo travelers tend to advocate that “being alone one tends to interact more with strangers”. While those who travel with someone else often think that “when you travel as a couple, you learn and grow together, giving each other support on the road and, as such, enriching your journeys.” But not many discuss what it is like to travel in a multicultural couple, and that’s what I’d like to share with you.

Traveling around the world I have seen plenty of mixed race couples. But most of them, even if of a different race, were born or have been long term residents of a given country – more often than not, the USA. But traveling in a multiracial couple is not what I am referring to – what I mean is a multicultural couple. Because being multiculturally distinct adds a twist to travel most don’t get to experience.

I am a Portuguese girl married to an Indian guy. Ashray and I met in Dubai, where we used to live and work until 2011, when we set off to travel around the world. As a couple who dated and decided to eventually get married it’s obvious that we have a similar outlook towards life. But that doesn’t mean that we are culturally identical or that people treat us as such everywhere we go.

So, how does being in a multicultural couple

We’re not into researching our travels in advance that much, we like going with the flow. But still, particularly in the beginning, we did read travel books and online guides and quickly realized that most travel content is written by westerners and for westerners. Those were things I wouldn’t have noticed as such, if Ashray didn’t point out details such as “why would they explain how to use a squat toilet?”. And it’s funny if I think about it: I never come across guidebooks explaining to people how to use toilet paper, for instance. One would think such tips are “obvious”, but the truth is that, depending on where you come from in the world, such details can indeed be different. And this is one of the reasons why we started our travel blog – because we wanted to share with the world what it’s like to travel, no matter where you come from.

Most couples share the same nationality so they won’t usually come across the instance when one gets visa on arrival to most countries, while the other person has to apply to obtain such privilege. For those used to get their passport stamped when they land in a new place, let me tell you that applying for visas in advance is not sweet. It’s time consuming, expensive and, sometimes, you’re almost treated as a suspect of something you haven’t even done – you must show proof of financial solvency (up to 6 months of bank statements), sometimes even a letter from your employer allowing you to “go on vacation” or a write-up detailing itineraries you haven’t even made. It’s like you have to prove you are “worth it” to visit certain countries. Quite often, even after going through all of this, you are granted a visa for a shorter duration than those who get stamped on arrival.

Traveling with Ashray I have learnt how to appreciate the fact that I can get so many visas on arrival – and for free! I think travelers often forget how much of a privilege that is. Now, for me, tourist visas are something we have to get.

[This is also the reason why Ashray started a section dedicated to share his experiences and info necessary to obtain tourist visas when you have an Indian passport.] Experiences on the road

Interacting with each other’s families and cultures has probably made us more understanding and flexible. This way, I believe we suffer less culture shock these days. We have learnt that people have different habits depending on where in the world they are from. As such, the best rule tends to be “in Rome do like Romans”. Learning how to adapt with each others’ families and in the distinct social context in our countries, Portugal and India, has turned us into adaptable people no matter where we go. It helps us blend in.

We like different things, so we see and do more!

Both Ashray and I like different things. Whatever you grew up with won’t normally interest you as your attention as a curious traveler goes towards the unknown. While I care for rural environments, Ashray has seen plenty of that growing up in India. He’d rather roam around the happening neighborhoods of New York City instead of paying big bucks to tour the slums of some developing country. Why would you pay to see something abroad that you can see near you every day for free? Similarly I don’t care for visiting Churches, as I have seen too many in my life already. But as we are together and do things that each other has interests in, we end up covering a greater variety of activities. Often, we end up exploring distinct realities – and we do encounter pleasant surprises along the way!

If we were traveling with someone with the same cultural background as ourselves, chances are we would just skip certain things and never find out what it would have been like.

In Sickness & in Health

Growing up in India and Portugal, it’s amazing to observe how Ashray and I both have such different immune systems. I get sick way more often than he does – particularly when it comes to upset stomachs and food related issues. Not only Ashray is more street smart than most when it comes to hygiene in developing countries (particularly regarding street food or shady looking places) he is also more resistant than me and therefore able to stay put when I’m sick. It’s not practical when both people fall sick at the same time in a couple but, luckily for us, that’s never happened until today. That’s why we’ve already decided that our kids shall one day “play in the mud” and eat street food too, so that they develop decent immune systems and are able to travel to places with different foods, weather or standards and, hopefully, go around without having to worry too much.

No matter where we go in the world, we always go back to our countries. That means that we’ll regularly go to India and Europe (Portugal and Spain, where my family is from). This helps us travel even more, working out as a great excuse for stop-overs, itineraries that include other countries en route and, of course, more extensive travels within our countries of origin too.

Even if worse comes to worse and the day when we don’t get to travel as much as now comes around, we’ll always have at least 2 extremely different parts of the world to look forward to! How people perceive us

I could write an entire essay just on this topic! We have encountered so much kindness and so much prejudice too around the globe. The truth is that most people do have preconceived ideas of inter-racial couples. Those vary depending on the region of the world you’re in, but let’s say these aren’t generally positive notions. For instance, as I am white, people will assume I am the one with money. Situations have happened when Ashray asks for the bill at a restaurant and the waiter comes and hands it to me. I guess the fact that so many white old men are living the sexpat life-style in countries around Southeast Asia doesn’t do any good against preconceived ideas like this.

Still, on the money side of things, I have observed how we tend to be less of a target for touts and street vendors with iron perseverance. While white couples and groups of tourists are harassed several times even when repeatedly replying NO, we’re normally just asked once or twice and saying NO politely once does the trick. I think vendors tend to think that western tourists would be better targets for the local businesses anyway.

Between the both of us we speak 6 languages. As such, we cover a good range of countries where we can easily communicate with people.

Further more, I get to talk with people in India in a way I wouldn’t be able otherwise, and the same happens for Ashray when we are in a Portuguese or Spanish speaking country. This helps tremendously getting the real story behind a place and when you only grasp a basic understanding of the local language its just not the same. I can talk with poorer people in India via Ashray, as they wouldn’t normally know English, only Hindi. Or in Mexico, for instance, I can talk to a given cab driver and learn about the “real life” of Mexico City. And this is one of my absolute favorite things about being in a multicultural and multilingual couple. There are many things that make our travels in a multicultural couple a little different than the norm. We’re learning as we go with each other and, above all, we’re getting to see from the first row how individuals around the world perceive other cultures.

Hopefully, as the world mixes more and more and people from all over the place get to travel, prejudice and preconceived ideas that ultimately limit the way people see one another, will slowly disappear. Until then, we are enjoying the ride!