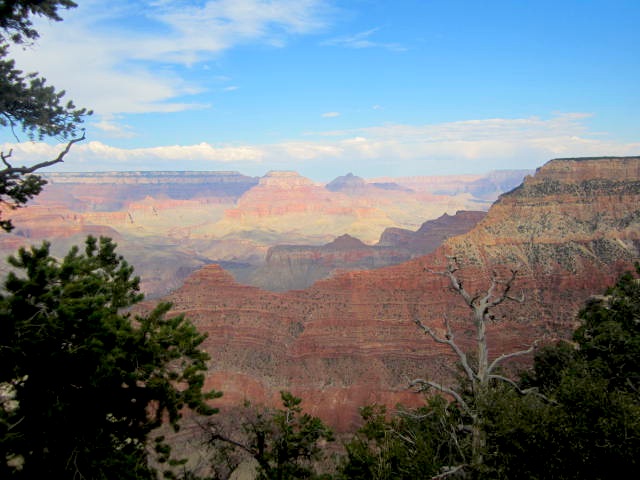 September 12, 2012 /Posted in Around the World in 80 Posts, North America, USA & Puerto Rico /By Vandana Sebastian

Two weeks ago, my roommate, Mary, her dog, Finnegan, and I packed ourselves into her car. Mary and I occupied the front seats. Finn occupied the backseat and the cargo space, along with our backpacks and the numerous add-ons one has to carry when traveling with a dog.

The three of us were off to see The Grand Canyon. For Finn and I, it was the first time.

We live in Phoenix, and the drive is usually four hours. We took longer because we took frequent stops.
The drive was gorgeous. It was a sunny day in late August. We passed fields with bright yellow sunshine flowers, green forests and mountains. 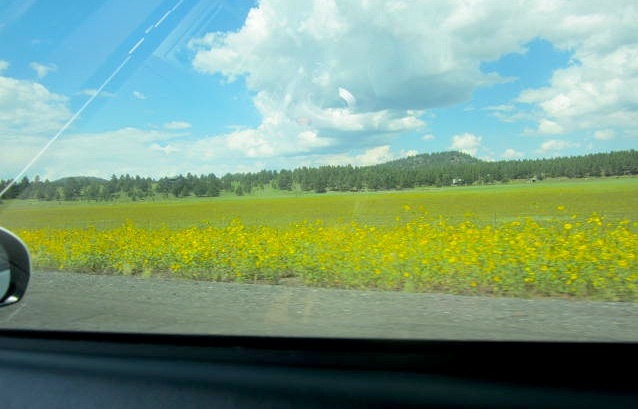 Flower fields on the route from Phoenix to The Grand Canyon

The mountains take your breath away when you first land in Phoenix. A bustling city surrounded by faraway violent magnificent mountains. It’s hard to take your eyes off them. It makes you wonder how no one else seems to notice them, how the world seems to rush to work and back home without stopping and staring at them in awe. A few weeks after living in Phoenix, you don’t notice them anymore. They merge into your life like the hot sun that doesn’t cripple you any longer. And then suddenly while driving home from work one day, you’ll watch the sun catch the tip of a distant peak over the cars and the traffic lights, and be stunned all over again.

By mid-afternoon, we reached the Grand Canyon National Park. It’s thickly forested, and you have to drive in a bit to reach the Canyon view. 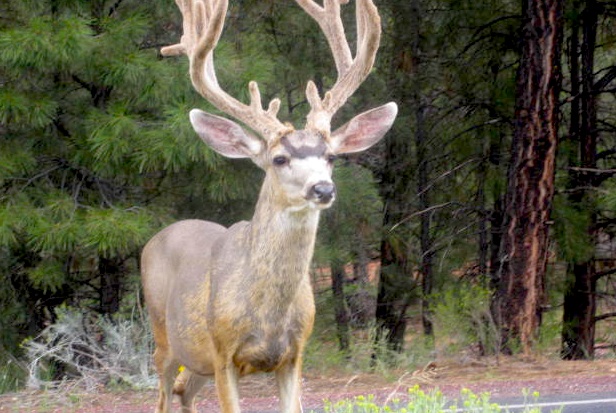 There are only about a million things to do at the park. There are campgrounds where you can set up tents and resorts to holiday in. You can ride a mule around the canyon or take a helicopter tour. There are numerous hiking paths at different difficulty levels. Some take a few hours, and some go up to a few days. A professor of mine at journalism school took an uncharted hiking path at the Canyon, and hiked for 11 days without meeting a single human being.

I’ve seen the Grand Canyon on so many movies, TV shows, magazines and pictures that when my eyes first sweeped those peaks, it was like déjà vu. I felt like I’d been there before. And then I felt tiny. I was so small and the world was so big. And there was so much to do and so much to see in it.

The weather drops considerably as one moves from Phoenix towards the Grand Canyon National Park, and can get chilly. We had to wear light jackets.

We walked along the rim of the Canyon all evening. We didn’t do anything hardcore. We breathed the Canyon in, stopped whenever we felt like it, talked, walked in silence, and took in the beauty. 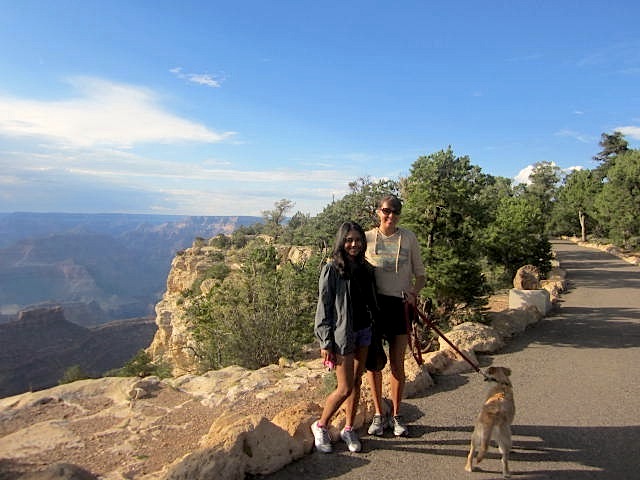 Mary, Finn and I at the Canyon

We drove back to a town that lies midway between Phoenix and The Grand Canyon called Flagstaff. It’s a small hill station and a ski getaway for the Phoenix crowd during winter. The town is spotted with cute cafes and diners. We stayed at the Ramada hotel, a convenient, budget-hotel that had a very small fee for pets.

Flagstaff is another great place for hiking, camping and rock-climbing. Our third roommate, Michael, who’s super outdoorsy, drives down to Flagstaff every single weekend to camp and hike.

The next morning, we decided to go horse riding. It was great weather and a very Arizona thing to do. There are ranches all over Arizona, and it’s a great place to learn horseback riding.

I’m a novice horse rider. But we planned to take a tame trail, and usually the horses are so used to walking the same trails multiple times a day that riding them is almost robotic. Or so I thought. 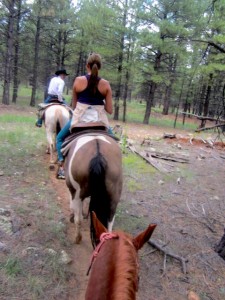 Mary and I followed our cowboy, Jordan, on our horses into the woods. A few minutes into the trail, while I was quite enjoying the quiet woods and the experience of riding a horse by myself, my horse, Rocky, stopped shot. He swung around and started trotting in the opposite direction. I pulled his reins and tried to swing him around. But he started running. It was a quick trot at first, and then a gallop. My heart was in my mouth as he rushed into the forest with me hanging on. All I could see was a blur of green as Rocky sped past the trees. My helmet slipped off my head and covered my face. I pushed it back on. By now my bones were being rattled, and it was hard for me to stay on the horse.

I heard Jordan calling my name and the noise of approaching hooves. “Pull his reins!” shouted Jordan. I did, and Rocky tried to buck me off. I slid off the seat and hung to his side. I got back on and wondered if I should jump off when the coast was clear. This horse was hell-bent on throwing me off anyway. I pulled his reins again, and he bucked. My foot came off one of the stirrups. I was alarmed. I knew the next time he bucked, I wouldn’t be able to stay on. But Jordan reached by my side, and Rocky stopped. Just like that. Just the way he had started.
I jumped off Rocky, and walked back as Jordan led the two horses back. We found Mary along the way, who, luckily, was safe.

We got a full refund and many apologies from the staff at the ranch. We later found that that there was a bear in the woods that had spooked Rocky. Though I knew I could have been seriously hurt, or worse, I was glad for the crazy end to our trip. It made a great memory. For two days after that, I walked with slow, painful steps as the muscle aches set in.
We drove back through Sedona. Though it doesn’t have the celebrity status of The Grand Canyon, to me, it’s as beautiful. I had been to Sedona before, and was enamored the second time. It’s a city surrounded by imposing red rocks. Another hiker’s paradise. You can explore you own trails or head to the popular spots like Grasshopper Point and Sliderock. Carry your bathing suit as there are swimming holes all over, and the best thing after a hike is to cool off with a swim in the river.

We reached Phoenix by sunset, our faces still bright with the glow of the mountains.

VANDANA SEBASTIAN is an Indian journalist based in Phoenix, Arizona. Her job is just an excuse for her to do everything she loves – reading, meeting new people, asking weird questions, learning about new things, writing and traveling.

Would you like to contribute a guest article for Backpack ME? Get in touch!