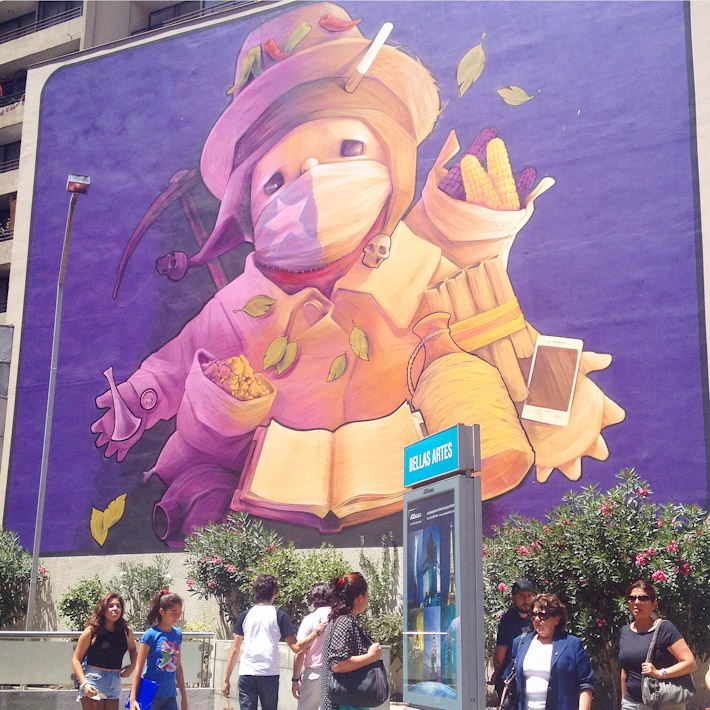 I’ve said it before, and I’ll say it again: Chile has THE BEST street art I have ever had the pleasure to lay my eyes upon. In fact, there are 2 things that are better in Chile than anywhere else I’ve been to: graffiti AND street dogs.

The street art in Chile doesn’t only stand out from an aesthetic point of view. It is always supercharged with messages, political and social.

This is a mural that decorates the entrance of the Bellas Artes metro stop in Santiago. It represents a typical lady from the Andes, with the attire and other things that make her so traditional  – notice the chili peppers, cereals (like the very Andean purple corn) and the utensils to work the land with. But she is also presented with the contrast of “old vs new”: education, technology, vices and even a little skull on her clothes, which I believe represents death. Not necessarily her death, but the death of tradition, of a certain way of living. Yet the most “in your face” element of this mural is the Chilean flag which seems to be suffocating the colorful Andean lady.

This is another mural decorating the wall right next to the one pictured as today’s photo: Chile is a country where capitalism thrives. Where minorities and indigenous people’s rights are often left aside (google “Mapuche struggle” if you’re interested in reading more about this). I think this is what these murals are trying to tell us: to stop and think that, those who may live a little different than us, have the right to do so. Independently of who may stop profiting because of that in the process. And to, independently of where we’re heading, never forget where we have come from. You can think about this in Chile, or anywhere else in the world.