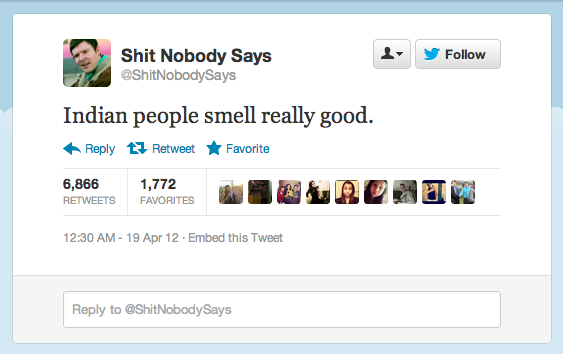 As you know from my previous post, I am now living in India. I have been here for about 2 weeks now and, although I already have many stories to tell, I’ll start with one that stinks!

While I was working in Dubai, I have many times heard comments on how Indians smell. In fact, I have heard the expression “little onion” referering to an Indian person, or even just brown people in general. Could have been Bangladeshi, Pakistani… who knows! Although they hate if people mix them up, the truth is that the world tends to put them all under the same category. Some might even say “the curry eaters”. In Dubai, I did come across and worked with several Indians that did in fact have an attention attracting body odor, but I always thought that with the tremendous heat they used to endure, they would naturally sweat and, of consequently, smell. I mean, those laborers who carry materials all day long under 45C weather are not going to smell like roses by the end of the day, are they?! 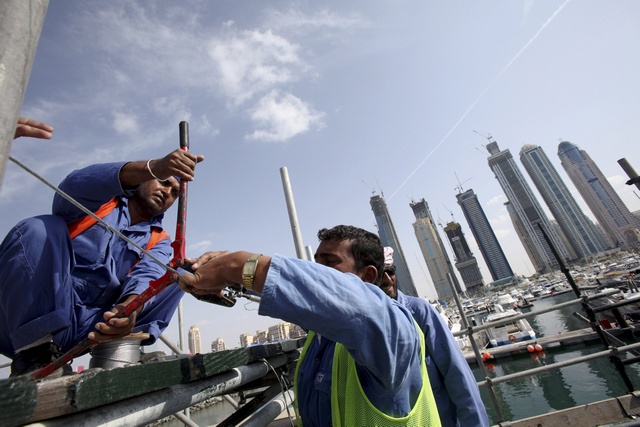 Who smells good working 12 hours a day under the sun?! NO ONE does!

Putting brown people aside for a moment, let’s focus on black people. When I first told Ashray in Portuguese we have a world to describe the smell of black people he immediately thought we’re damn racists. I guess the colonial past doesn’t help this argument either…. Anyway, the case is that we say black people smell of “catinga”. Catinga basically stands for the strong body odor of a black person. 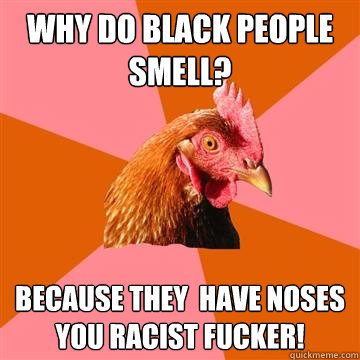 Why do black people smell?

And what about us whites?! Don’t we smell?! I decided to research this and came across some interesting posts on the internet that suggested white people smell like “wet dog”! And apparently we do smell more than East Asians too!

So apparently white people smell of wet dog or, even better, dead animals!

It’s not the first time I think about body odor and about how it is socially perceived – don’t judge me! We all have our hobbies and interests and turns out smells and poop stories are some of mine!

After a couple of days in India, stripping myself of my Miami Ink t-shirt I felt an Indian scent in the air. My nose naturally went on a research mission and approached the fabric that corresponds to the area underneath my arm pit. And it turns out Miami Ink smelt like curry!!! Do I stink?! I’m not sure if I could call it a stench as such, but it was definitely not my usual body odor. Yes, the one that smells of red carnations, as I am Portuguese after all. 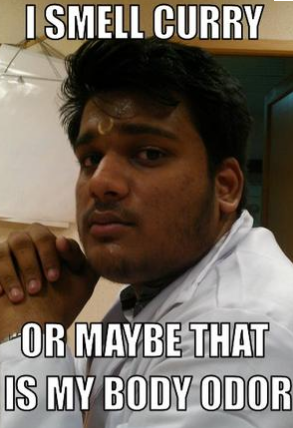 Curry is all around us!…

I had been eating exclusively Indian food for a couple of days in a row and the new diet did affect my smell. It was not one of those “I can’t stay inside a lift with you” sort of smells, but there was definitely a light scent of curried Zara attached to my t-shirt. I have been dating an Indian man for years and he has never smelt like that – why was I smelling of curry?! Was I becoming brown already?! 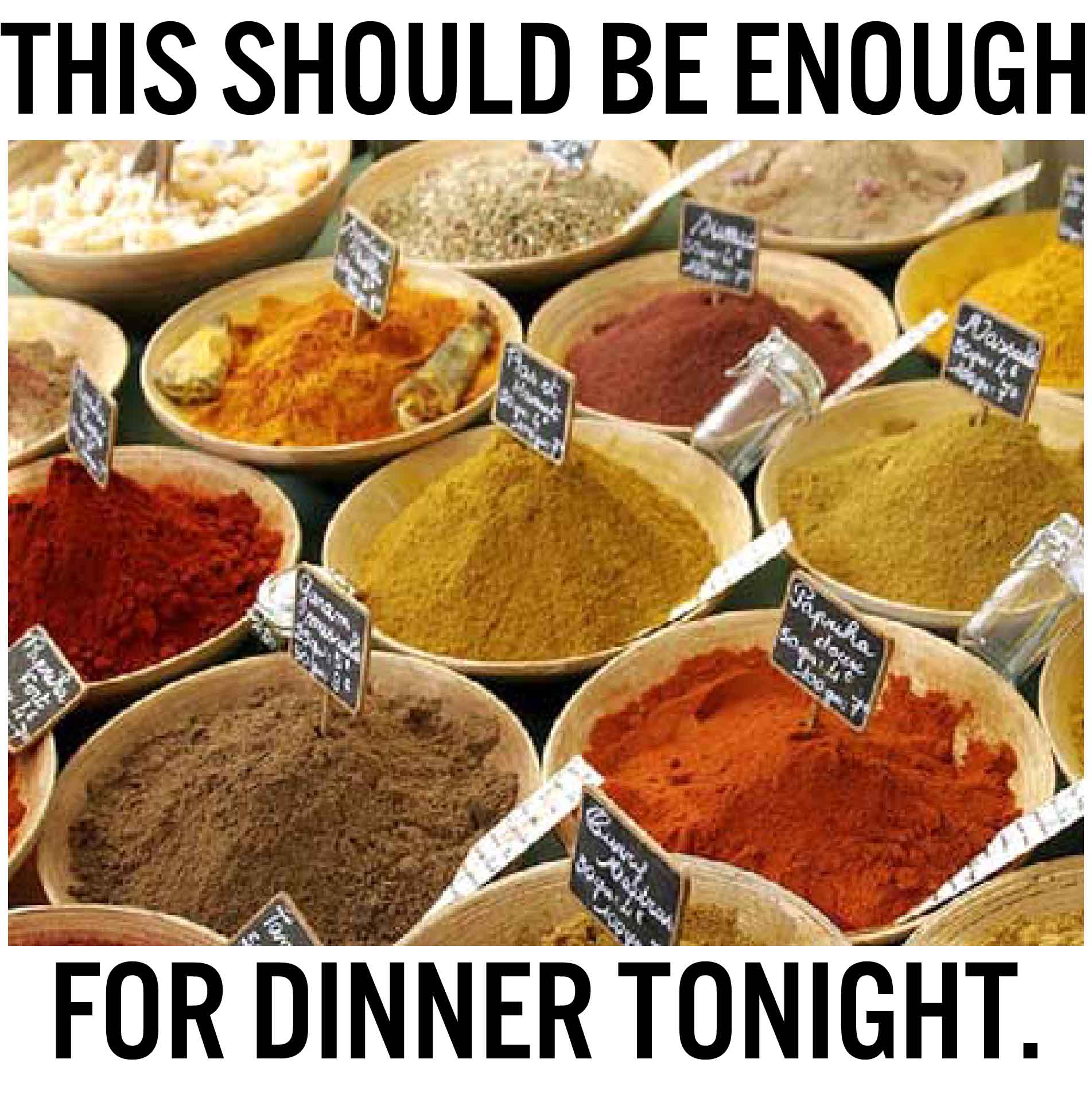 Spices come in… and spices must come out!

One can only conclude that smells are a very subjective thing. I have read that some races are more prone to body odor than others, as the sweating glands do act differently for different races. But one thing is to sweat (in whatever proportion you might sweat) and another thing would be for your sweat to smell of one specific thing or another, more or less strongly. My own spontaneous research proves that your smell would depend greatly on your food intake.

There's a logical explanation behind most things in life…

Here I am, with this white face like Casper,

About a week has elapsed since I first smelt some masala on me. Although I did smell differently for a couple of days, my odor is back to normal now – yes, my green field full of flowers blossoming under the sun scent is back! I have been eating Indian food ever since but I guess my body must have regulated itself somehow and there is no particularly Indian scent no more – believe me, I have more than my nose to attest for this!

And what’s the point of this ramble about sweat

Well, I meant to open up your mind (and nose) for the fact that anyone can smell at any given point of time  - even if they bathe and use good smelling products! We’re not discussing the cases that happen due to lack of bathing, ’cause if we were to dig into lack of hygiene in this post, that’d be a whole different story. Perhaps we might all smell more than we think and different people can actually feel it even if we don’t. We might be desensitized for the smell of others around us being from our same race or with same eating habits as us and find other people do smell, when maybe amongst themselves they don’t actually find that same smell to be unpleasant.

So smell based racism is not justified (not that any other type of racism is, by the way) and should be frowned upon. 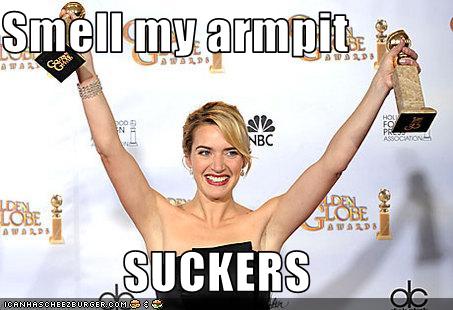 Also, I take the opportunity to share with you that Dove deo for sensitive skin does not do its best job in India – you need something more hardcore!