Selling and Socializing in Havana 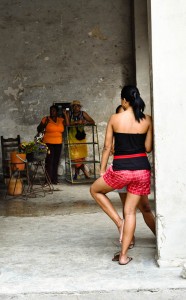 What people have to do in Cuba

All jobs in Cuba are controlled by the government. Aside from some taxis, Casa Particulares (Cuban home stays), and Paladars (family run restaurants) you’ll rarely find someone who doesn’t work for the government.

Folks in Havana sell flowers or other odds and ends to make some extra money. In a country where the average salary is USD 10 per month and anything other than government rations cost a pretty penny, a little bit more means a LOT!

People in Cuba really TALK! In a country where you don’t have the option of avoiding social contact by looking busily at a blackberry – conversation with neighbors or people around you takes on a whole new dimension! It’s wonderfully social and not in the Facebook/Twitter way!