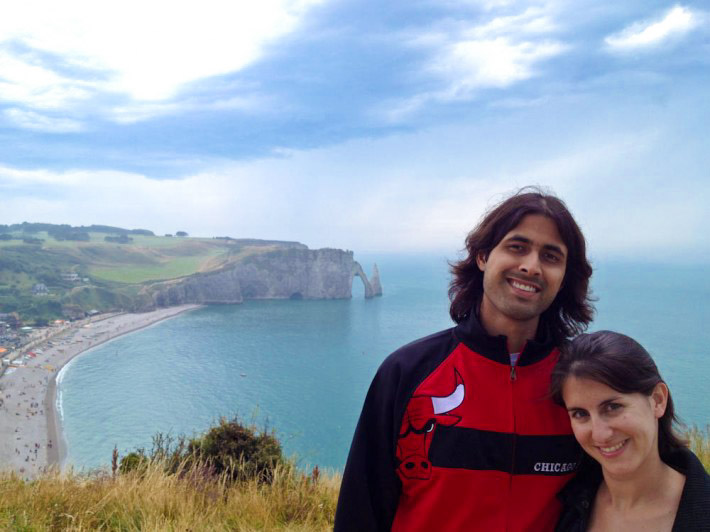 On a fine Saturday morning in July, we decided to make a trip with some friends to Etretat, a little town in France that lies in the region of Normandy. The name Normandy rings a bell because this is the place that the allied forces chose to turn around World War II. Today, it’s hard to believe that a place so pleasant and peaceful could have such a gruesome past!

The beach is really nice and the water is quite cold (it’s the North Atlantic after all!). We had a nice day walking up some of the surrounding cliffs and taking in the absolutely stunning views. The day ended with adventure too as our train back to Paris got delayed by 7-8 hours and we reached home at 5am after eating some crackers for dinner. Since we needed to sleep, we ended up missing our bus to Brussels the next day and eventually ended up in Ostrava in the Czech Republic.

How did that happen ?

After missing our bus to Brussels, Zara checked online for train tickets (there was no other bus available). The train tickets from Paris to Brussels, a two hour trip, were going to cost us 99 Euros. What ?! So, I decided to open up skyscanner and look for flights from Paris to Anywhere. I found Ostrava in the Czech Republic listed at around $75. The decision was made! We had to head to the airport almost immediately to catch our flight to Ostrava that left in 3 hours. We had never heard of Ostrava until this moment and didn’t know much about the Czech Republic either. (it was wonderful by the way!)

So that was how we ended up in the Czech Republic without having any plans of heading there.