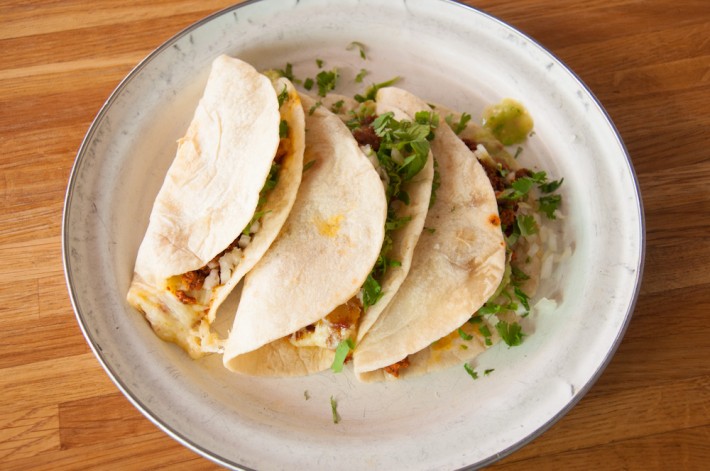 Mexican cuisine has got to be one of the most misrepresented when it comes to the international dining scene. So much that, for years, and until we actually traveled to Mexico, Ashray was convinced he hated Mexican food. Turns out those cheap cheese and sour cream loaded Mexican wannabe snacks at Tex-Mex chains abroad have little to do with what actual Mexican food is all about. Above: real Mexican tacos. Below: bullsh*t!

I can’t say these past weeks staying in Stockholm have been some of my happiest when it comes to that magical combination of traveling + eating the typical food of the place you are visiting. I tried the local specialties, sure, and then I moved on. After all, a month and a half in town were enough to dig in a little deeper and try to find some restaurants serving some of the food we like to eat the most. And while it’s extremely rare to find authentic Mexican food outside of Mexico, Central America or certain pockets inside the USA, Sweden managed to surprise us!

La Neta – Taquería y Tortillería Mexicana serves tacos and quesadillas that taste just like those we ate in Mexico. That, of course, is a compliment! On their website, the people who started this Taqueria explain that they were a little fed up finding Tex-Mex food wherever they’d go in Sweden. Furthermore, the supermarkets here in Stockholm often have a little Mexican section that are full of products you basically never come across in Mexican stores. Including those horrible hard shells for tacos, that are nothing but a giant funny shaped Dorito. The nostalgia, the desire of showing Sweden what Mexican food is all about and the love for their heritage, eventually materialized in La Neta. And we say MUCHAS GRACIAS for that! In both its locations, La Neta serves straightforward food in a no frills environment. The place feels so authentic that, the first time we visited, we had to communicate in Spanish, as the employees didn’t speak English. We ordered a mix of tacos: al Pastor (marinated pork meat with thin slices of fresh pineapple), Suadero (boiled beef) and Bistec (grilled beef). The soft corn tortillas were a perfect bed for the meats that were intensely marinated with all the right flavors. The toppings bar, just like any regular joint in Mexico was there to make your tacos extra happy. We could add chopped onions, cilantro, a couple of red and green spicy sauces and lime wedges. No sour cream. No shredded yellow cheese. No non-sense. For a little while I grabbed a taco in my hands, ignored the folks eating their food with fork and knife, closed my eyes and felt like I was traveling in Mexico again. At La Neta in Sodermalm La Neta: a little piece of Mexico in Stockholm

We eventually moved on to quesadillas, both with chorizo, cubed potatoes and beans (pictured on the featured photo above), and and kept on nibbling totopes with a generous amount guacamole on the side. Another thing that Tex-Mex has distorted internationally are the fried corn chips, known in Mexico as totopes, but elsewhere as nachos. In Mexico, these are never flavored with cheese, chili, BBQ flavor or whatever else. They simply consist of corn dough which is fried and then used to scoop either salsa, guacamole or refried beans. On the drinks side of things, La Neta has a variety of Mexican beers. If you ask me, a good Mexican soda like Jarritos would be an excellent addition. Nothing like a good Jarritos Tamarindo to ease the burning feeling that a taco with a good splash of red chili sauce leaves as it goes down your throat.

Stockholm seems to be obsessed with Tacos and Mexican restaurants in general. But what these places often forget to tell you is that they are actually Tex-Mex. So going there for tacos is almost as good as traveling to Italy for samosas. If you’re really craving Mexican food while in Stockholm, don’t look around much and go straight to La Neta. It might not be the same as taking a trip to Mexico but, while in Stockholm, this is as close as it gets!