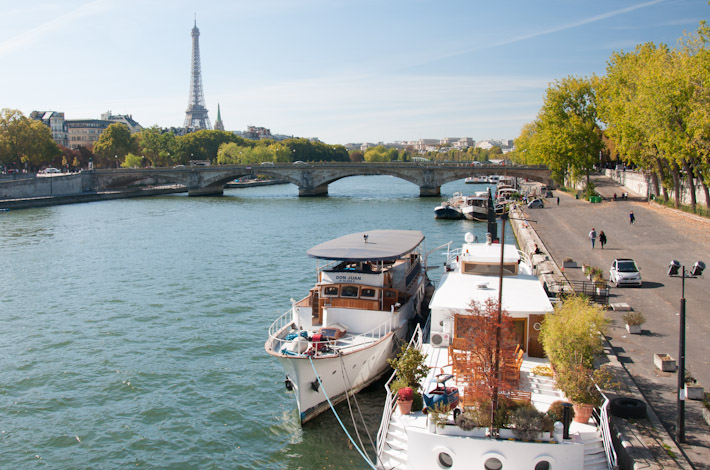 Paris in summer is like a pancake with too much maple syrup. Good on the inside but unbearable on the outside.

Tourists throng about all over the city indulging in the most obnoxious touristy behavior. From photos where sixteen girls try and coordinate a simultaneous jump to American grandpas walking around in ‘I love Moulin Rouge’ t-shirts. Parisians metamorphose into their grumpy versions (yes it’s true – apparently Parisian grumpiness is seasonal). You’re left with a feeling that Paris is truly a pancake gone terribly wrong! This year we visited Paris after the tourists mostly left. Well, at least there were fewer crazy ones. Suddenly we landed up in a city full of charm and wonderful people! Was this the same Paris we visited last summer?

Locals became kind, and greeted us with smiles. When asking for directions we didn’t get those looks that said ‘ Oh my god.. Again?!’. The lines to enter the Eiffel tower were down from 5kms to about 2kms. There weren’t any airborne teenage girls. Suddenly I was in the Paris that I had seen in all those movies. The city that made people go ‘Ooh la la!‘. Locals and tourists enjoy a sunny day out at Luxembourg Gardens

We could appreciate the vibes of regular Parisians living their lives. There were charming artsy corners and streets that looked like they had been brooding the loss of the 18th century. A random street corner in Paris

Paris was ours. Well at least as long as we stayed away from places like St. Michel and Notre Dame. Notre Dame as seen from the love lock bridge

We even did the touristic circuit. Champagne at the top of the Eiffel tower and a visit to Versailles. But even though there were tourists around (hey, it’s Paris after all!), it was all very pleasant. The Eiffel Tower seen from the 1st floor

Moral of the story?
Skip the summer in Paris. Choose any of the other 3 seasons and you’ll have the time of your life!