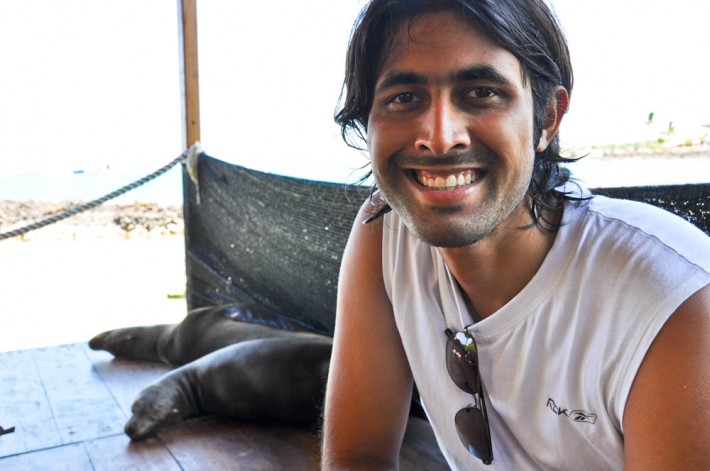 Galapagos Islands is one of the places I was looking forward to the most ever since we started our travels around Latin America.

Being a rather exclusive touristic destination, Galapagos aren’t close friends with budget travelers, attracting mainly US American tourists that enjoy this beautiful place while the rest of the World drools about the possibility of coming here one day. The week before we arrived, rumor has it Brangelina was cruising around this side of the globe.

Flying to the Galapagos

The only way to arrive in Galapagos Islands is by plane, as there are no passenger boats connecting the mainland and the islands. You can either fly to Santa Cruz or San Cristobal islands but it will always be from Ecuador, via Quito or Guayaquil, as there are no direct flights from anywhere else in the world. See the exclusivity pattern going on already?

3 airlines operate flights to the Galapagos: Aerogal, Lan and Tame. For the date of our travels in May 2012 using Santa Cruz’s Baltra airport as gateway, the rates wouldn’t vary much amongst them. Aerogal was booked for the entire month and we ended up using Lan for  USD475/per person round-trip. For a 1h40min flight, it’s clear that prices are quite high, specially considering that they give you a mini-pack of Chips Ahoy as in-flight meal! These figures apply to international visitors only, as nationals pay half of this amount only. But I have to say that it’s one of those things that I would classify as 100% worth it. Galapagos was everything we were expecting, and more!

Galapagos is rather popular with sailing adventurers too. We met 2 couples that were going around the Pacific with their sail boats and stopped here for a while. Pretty impressive task if you ask me… If you come on a sailing boat, you will have to park it at the port of one of the inhabited islands and get around like any other tourist. You can sleep in your own boat, of course, but won’t be able to use it as means of transportation between islands, as there are a lot of rules and restrictions when it comes to boats circulating around these waters. 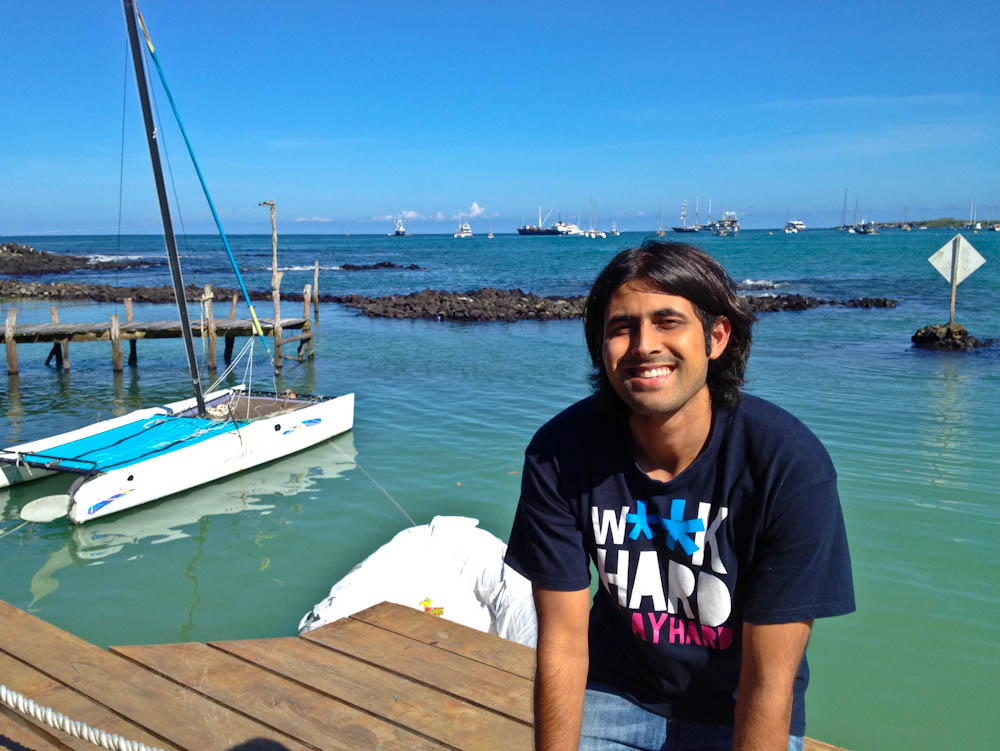 The vibes of Puerto Ayora

This is the biggest town of the entire archipelago of Galapagos, concentrating most touristic and trading life. Hotels, tour operators and restaurants to cater to tourists’ needs co-habit with suppliers that make a living refilling the cruise ships that take privileged ones around the islands, to visit this extensive natural zoo.

Puerto Ayora has a very cool vibe to it! I love being by the sea and the chilled out feeling that comes along with those views and breeze. Here, that dreamy mood takes on a whole new level when you can bike from one side to the other of town in less than 10 minutes, meet giant tortoises and observe the sea lions that walk around like only cats and dogs would do back where I come from.

We were lucky to be invited to stay at one of the greatest hotels I have ever stayed at: Red Mangrove Aventura Lodge. If having a room with a view of the incredibly blue ocean was something up to Brangelina’s standards, then having breakfast with the sea lions napping by our table was other-worldly! After one day in the Galapagos you understand that wildlife here doesn’t behave like most non domesticated animals do. Creatures do not react to human presence! They are not scared or even moved by the fact that you are in the same space as they are, almost as if they were unaware that you are not a regular part of that environment, just like they are.

Apart from those breakfasts with the sea lions, my favorite memories in Puerto Ayora would be by the fishermen’s counters at mid afternoon. Same as my mom’s dogs would be by her legs when preparing food, sea lions would approach fishermen with the fresh catch, with begging eyes. But they wouldn’t get any, as the Galapagos Islands have strict regulations that prohibit humans from feeding animals in order not to disturb their regular life. Unaware of any regulations, sea lions and birds would come around to smell the fish, to the fishermen’s annoyance but to the delight of tourists amazed by the proximity of the animals. Sea lions are so cute and gracious that you can spend a lot of time just looking at them and saying cheesy things like “Awwwhhh!”, as if you were looking at a newly born baby. Galapagos doesn’t make for a cheap holiday, that we already know. But it’s important to keep in mind that you can always work things out for the best interest of your budget.

Online, you are very likely to come across pricey options for accommodation. If you feel it’s a must to book in advance and you have the means to do so, go for it! But if your pocket is less flexible and still you are making it to this place, there are options for you too. In downtown Puerto Ayora you can find small guesthouses that will cost you around USD15 per person per night or even find rooms and houses online via Airbnb. If paying an average of USD10 for a main dish in the restaurants along Charles Darwin Avenue doesn’t suit you, walk for about a minute to the inner roads where you will find less tourists and more locals. Several restaurants around there serve “almuerzos”, set menus during lunch time. For USD3.5 or less you can get a soup, main dish and juice.

It’s great to come to such a dreamy place with a comfortable budget and enjoy the experience of a life-time, don’t get me wrong! But you don’t have to splurge to have the time of your life here, because at the end of the day your memories will end up focusing on all the natural wonders you’ll see rather than on the other luxuries that are obviously enjoyable but not a must. 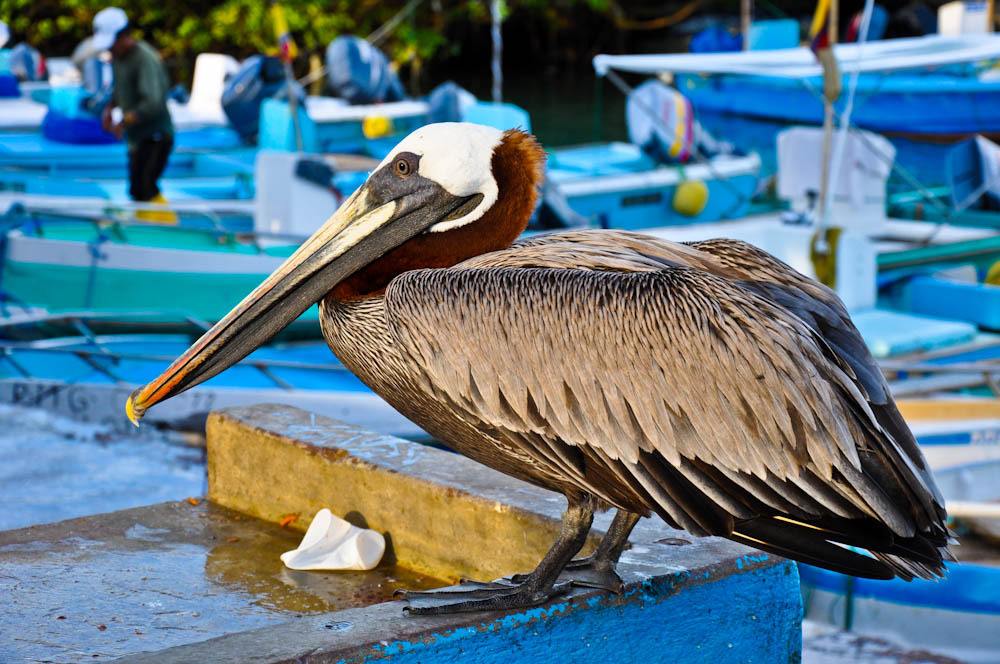 Pelican trying to score some fish at the fishermen's counter

Our main concern while planning this trip was: should we go in a cruise ship or do a land based tour by ourselves? We opted for the second option and do not regret it as we had an excellent time, saw a lot of wildlife and still got to sleep in comfy hotels during the night.

We spent our first days in Puerto Ayora where there is plenty to keep you entertained! 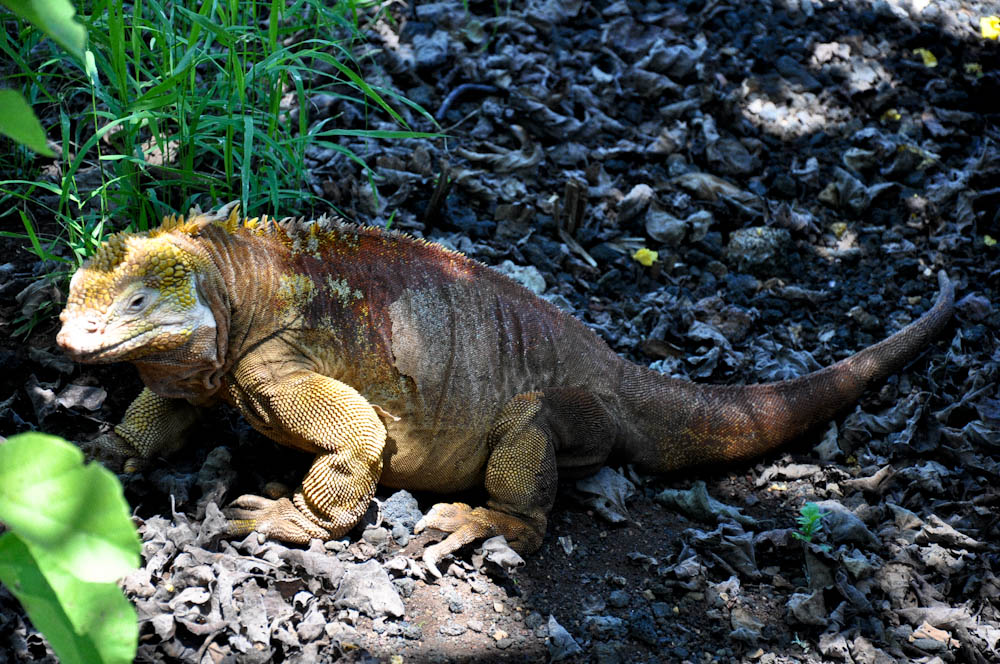 Iguana at the Charles Darwin Station. From up close his skin looks like corn on the cob! 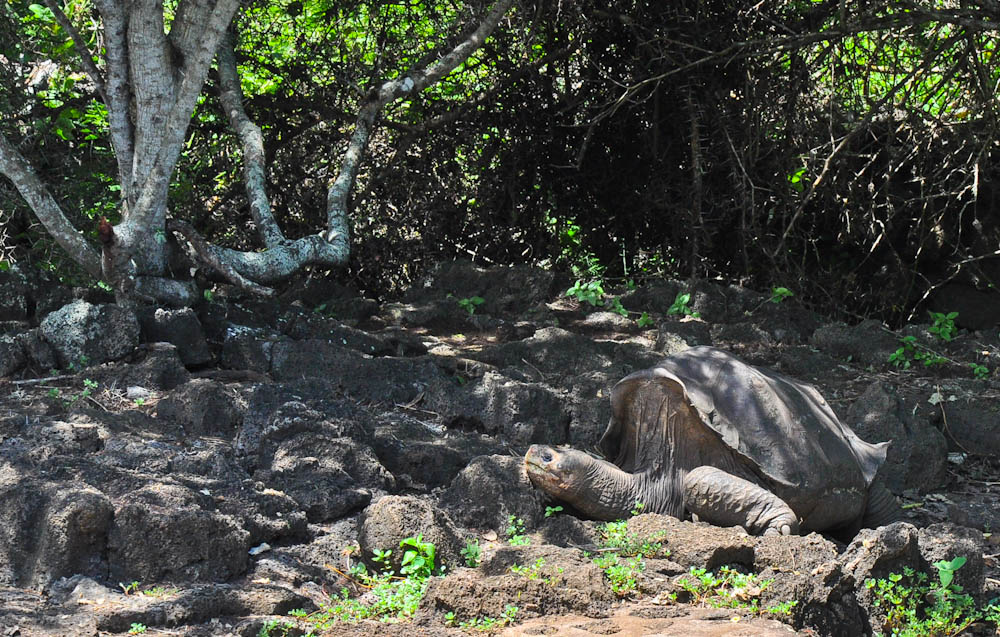 Lonesome George. He clearly doesn't know what feeling sexy is all about..

If you walk 5 minutes from the Charles Darwin Center towards town, you will come across a board pointing to STATION BEACH. This beach is tiny but beautiful! You can swim in the calm transparent waters as marine iguanas soak up the sun by the rocks. 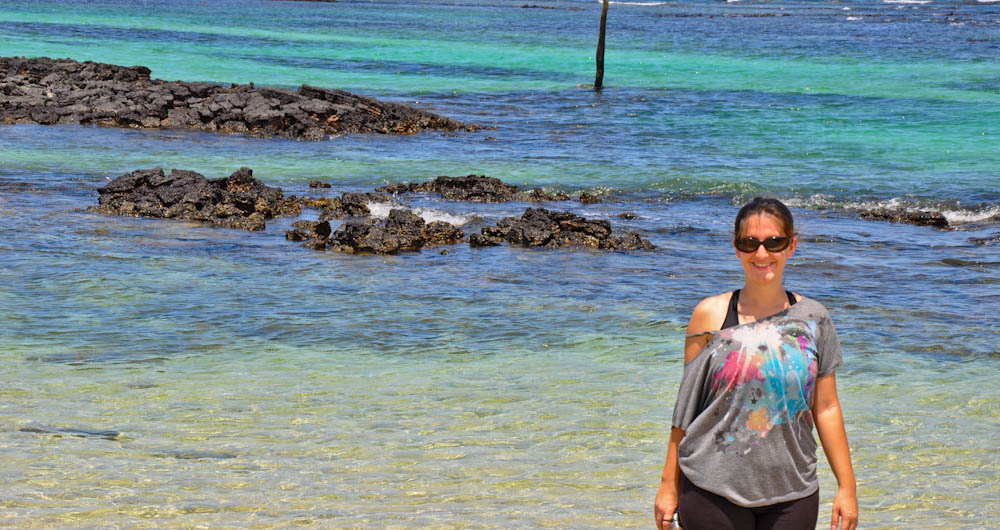 But if you are one for beach appreciation, you must go to TORTUGA BAY! This gated beach, part of the Galapagos national park, is only accessible on foot, and it takes about half an hour in the sun to get to. Worth every single step. The sweaty walk to the beach is rewarded by a feeling of bliss as soon as you get a sneak peak of the view. White sand that feels like smooth flour under your feet, a magnificent blue sea in front and wildlife all around, particularly birds and marine iguanas. Despite the looks, waters here aren’t appropriate for swimming due to strong under water currents. If you keep on walking, you will come to a little bay where it is almost as still as in a swimming pool. Perfect spot for swimming and even for snorkeling to spot turtles if you get lucky! 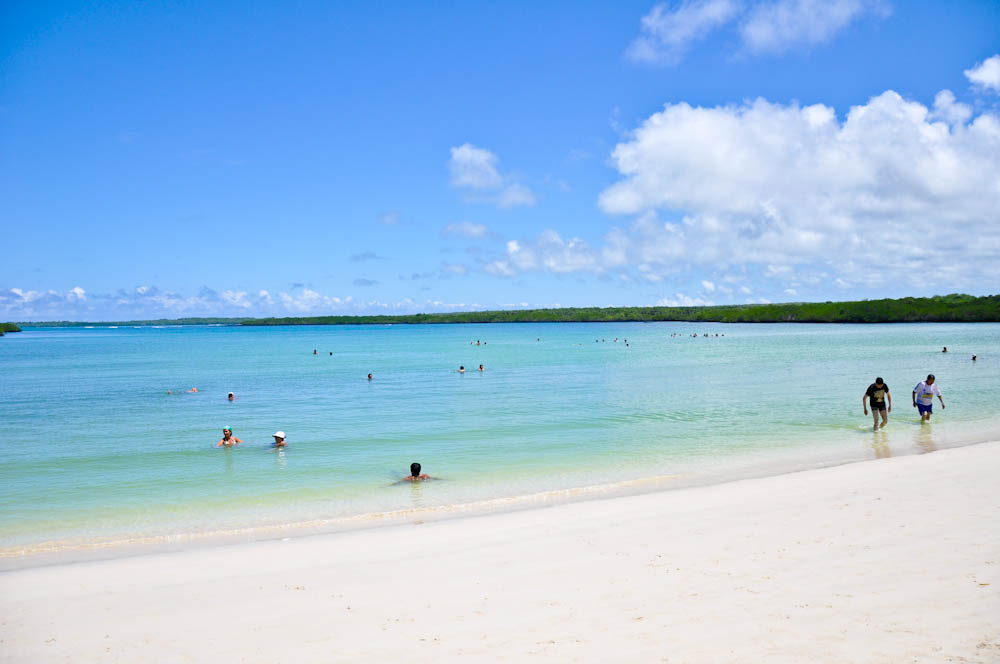 You do not have to pay to enjoy these and other activities in Puerto Ayora, as all the fun you can have in the National Park areas in included in the USD100 ticket you pay upon arrival at the airport (compulsory to visit anywhere in the islands).

Mr. Iguana The only dark thing standing out from Tortuga Bay's white sands.

In Puerto Ayora, and in the rest of the Galapagos, you can dig into incredibly fresh seafood! Fruit of the work of the local fishermen and that sea lions try to snack on, but fortunately ends up in our plates!

The other day we were watching a documentary about the sea life in Galapagos and there were a bunch of cod fishes swimming around. I immediately thought “hmmm… cod fish…. me… hungry!”. But then I felt a bit guilty, considering that I should be WOWed by the sea life and not salivating while looking at it. Being Portuguese, I guess I had to eventually loose my sensitivity towards cod fish as a living thing… I just can’t help but picturing it covered in cream, along with potatoes and au gratin in the oven. It’s unfair if I think about it, as I would never picture a sea lion cooked with this or any other recipe.

We ended up digging mainly in tuna and sword fish that are ubiquitous and commonly prepared grilled, in garlic or pepper sauces and as toppings for fresh salads. We had several meals in town, where food was generally very good quality. My top recommendations would be the Red Mangrove Restaurant & Sushi Bar and Isla Grill, both along Charles Darwin Avenue. Yes, we’re that touristic! 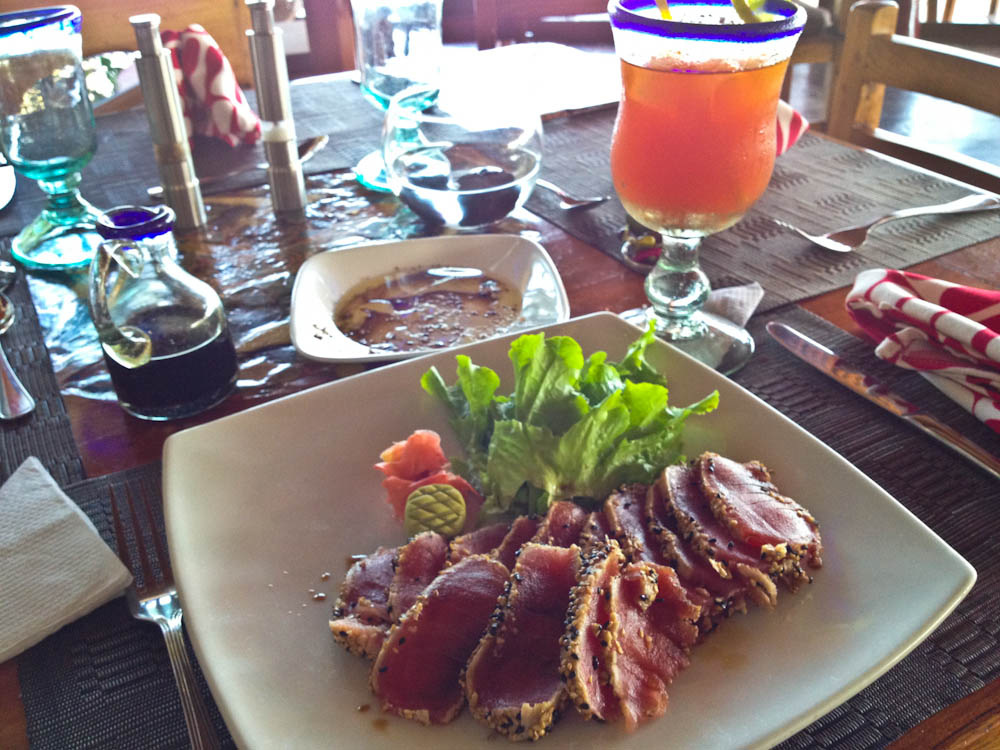 ISLA GRILL offers down-to-earth food, succulent and fulfilling. We had 2 meals in this restaurants at Charles Darwin Avenue and both were outstanding. Fish was always juicy, marinated to obtain delicious flavors, and with sides of extremely fresh garden salad and creamy mashed potatoes. The place is always pretty full and there is a justified reason behind it! 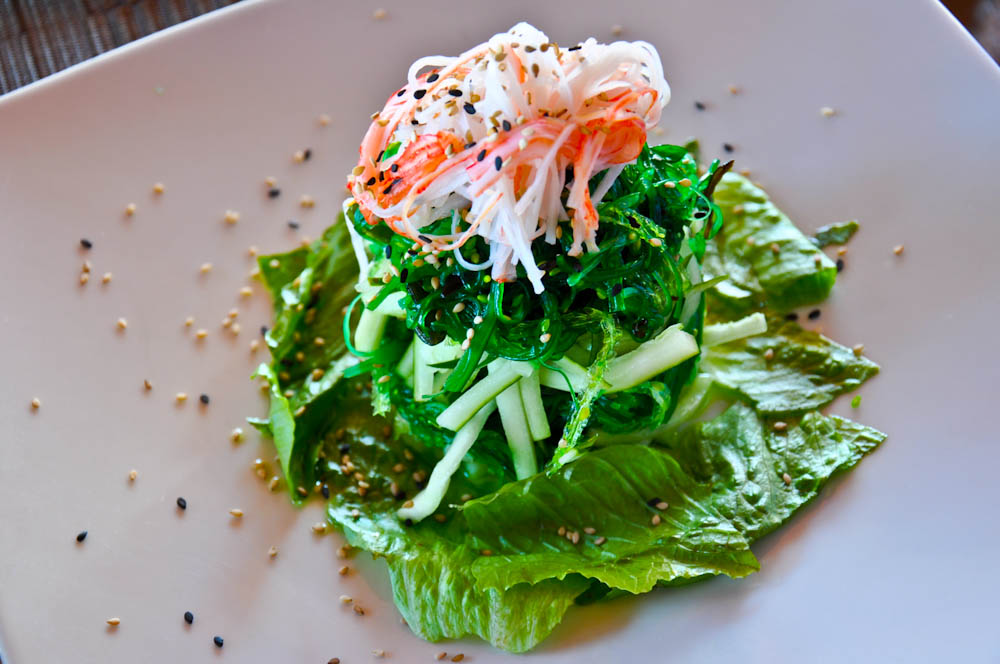 RED MANGROVE offers a more up market option that perfectly combines delicate flavors with one of the best views in town. Although their menu includes some traditional Ecuadorian dishes, the most popular dishes are Asian inspired, which is a great alternative to most restaurants found in town, that serve similar dishes. My Red Mangrove favorites were seaweed salad and tuna ponzu. Extremely well executed dishes that make something simple taste like a voyage. Your palate will water as you savor this food… at least ours for sure did!

A lot of independent travelers tend to look for information on Galapagos Islands, as much of the details you find online are regarding pre-arranged tours and cruise ships. If you’ve been to the islands and have any experience or tip you’d like to share, please spread the love and leave a comment below!

Read about our day trip to Floreana Island here!